Pittsburgh Chief of Police Held a Sign. That’s WHAT’S UP?!

On New Years Eve, Police Chief McLay was one of many who committed to #endwhitesilence by consenting to be photographed by WHAT’S UP?! holding signs that declared their resolutions to work against racism. The photo of the Chief has stirred up a controversy with the Fraternal Order of Police.

“White silence stokes the racism that divides People of Color and White working class people, who have every reason to stand together for better wages, better air, affordable housing, and an end to war.  We need to stand together with communities targeted for police abuse, because otherwise, we cannot build the unity we need to move forward.  It is in the interest of white people to stand against this repression for our own lives and those of people we love.” – Showing Up for Racial Justice (SURJ)

It took courage for McLay to break the silence and challenge a police culture that refuses to acknowledge that racial bias affects policing. White people have important work to do in examining and challenging racism, and while racial justice is about the desire for all people to live without violence, we must uphold first and foremost the words and desires of people most affected. Black lives matter, brown lives matter, indigenous lives matter, working class lives matter.

This is national news because it comes amidst mass protests against the killings of black people by white police officers. These efforts are born of the fierce leadership of Black youth across the country who are literally fighting for their right to live. In this context, it is remarkable that McLay held that sign committing to challenge racism at his workplace. It is momentous that Mayor Peduto continues to support him. Most of all, it is alarming that the Fraternal Order of Police saw this sign as a threat when police are literally getting away with murder. This is why WHAT’S UP?! is focused on addressing racism among white people, including ourselves.

For all of us, holding a sign can only be the beginning.

The efforts of WHAT’S UP?! would not be possible without the encouragement, love and guidance by our allies of color, who fight for racial justice every day, not by choice, but because their lives depend on it.

If you would like to interview someone please try contacting one of the amazing groups led by people of color in Pittsburgh who are doing profound and important work. Some include:  1Hood, Alliance for Police Accountability, New Voices Pittsburgh,  Pittsburgh for Justice, Justice for Leon, South Asian American Perspectives on Yoga,  We Change Pittsburgh 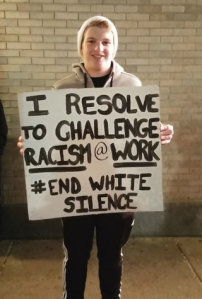 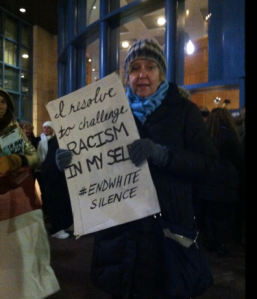